The PM on Defence (2) [edited transcript]

When this steering group last met I spoke of the inevitability of conflict, which I consider the platform for the expansion of our defence industry, one of the key costituents of our new export drive.

To remind you: War is coming. A nuclear conflict between major states may perhaps be less likely than a conventional one between the interests of a major state and one of the crime syndicates whose rapidly expanding financial strength exceeds, we know, that of many small countries, and indeed interstate war may be rather less likely than network warfare between a nuclear-armed fundamentalist religious grouping and a notionally religious but apathetic Western alliance, but war with massive loss of life, greater than that of the last century, triggered by the accelerating shortage of non-renewable resources, is the threat that we must face, ultimately, when we recognise that we cannot show the historic trend to have changed. To meet this future we need strong Armed Forces with adequate numbers, the best equipment we can produce, and high morale — this last being a factor shamefully neglected by our predecessors and one to which we must pay special attention immediately. Additionally, to support the front line, and to prepare for network warfare within the British Isles if the extremist Islam threat materialises here, as we fear may be unavoidable, we must obtain a substantial increase in the reserves, and especially in a renewed Territorial Army, to protect installations and facilities crucial to our wellbeing.

We shall be told by the news media and perhaps by some of our constituents that we should ignore the wider world, and should concentrate on our European relationships, because within Europe war is now impossible. Is it impossible? Our natural resources are diminishing, populations are on the move, climates which have fluctuated throughout time will continue to vary, Angela Merkel’s supporters are dying faster than her new ones are qualifying to vote for her, and fifty years from now our sparsely-populated Scotland might appear extremely attractive to an Islamist government in Germany seeking lebensraum. It is not impossible that Russia might then call on us to help defend Moscow. Who knows? I don’t and you don’t, but what we do know is that British artillery in 1914 had insufficient shells even for counter-battery fire, that we just failed to lose the war in 1940 because Hitler made a strategic error, and that we would have lost the Falklands if the Argentine Air Force had been better trained in the art of bombing at low level. Who can guarantee we shall have sufficient time to recover when next we are called to fight where or when we did not expect? In past years, when we escaped, we could train a recruit to have a modest competence in six weeks, but, with our present and future technology, that is now, and will remain, impossible.

There is much discussion insisting that we must first settle Government Policy, but that in fact is not the emergency priority. First must be calculated the irreducible minima for the capabilities irrefutably essential, because without this information policies will be proposed on the basis of non-existent resources. Machiavelli warned that “the great majority of mankind is satisfied with appearances, as though they are realities, and thus are often more influenced by the things that seem than by those that are.” This has been true for many years in the composition of Defence policy, and we are now to stop it. A submarine nuclear deterrent that is, as has been suggested, occasionally unavailable is not a deterrent on which policy may be based. A policy for a reliable projection of British power intercontinentally cannot depend on a calendar during which crucial assets are available for only two-thirds of the time. An Army reduced in infantry strength to below its critical mass, that is (among other criteria) to the figure at which skills cannot be passed from one generation to the next, does not provide a platform for the creation of long-term foreign policy. Thus competent and experienced analysts (not politicians, nor arms manufacturers, nor wishful dreamers, nor journalists) must advise us on the conflicts for which preparations must be made. The assets necessary must then be selected. Then the personnel necessary for the employment of those assets must be numbered. It is only then that we may use this information to devise policies that do not conflict with our principal responsibility, the security of the nation. Salus populi suprema lex esto. Those policies, fed back to the military, will facilitate agreement on how much more than the minima will be necessary.

The current state of the UK’s Armed Forces is catastrophic. Rectification of this by conventional means would require an immediate provision of all the money that had been required and refused during the last two decades, plus the money now required to repair the damage inflicted by the lack of that money, plus the new money required to maintain the Armed Forces with the operational skills and assets necessary to ensure a successful defence of the British Isles and our overseas interests. As the company bequeathed to us, UK plc, now teeters on the brink of insolvency, such a massive sum will perhaps require an unconventional approach, but first it is essential to stop the routine and incomprehensible waste of the existing budget.

Its many well-publicised procurement failures have lost the MoD all the credibility it feels is its due. Israel can launch more air strikes in 36 hours and field more armour in the same time span than any other country (including the USA), and Israel’s procurement is managed by a staff of 400. Here in the UK our MoD’s procurement procedures have apparently historically required a staff above 20,000 (now being reduced I’m pleased to say) – which in part must explain why programmes meet extensive delays and exceed their budgets by vast amounts (as Parkinson tells us). “Efficiency savings” have only ever cynically introduced politically acceptable inefficiencies encumbered with the hidden long-term costs our predecessors kept off the balance sheet, but now the intellectual honesty the post-Brexit situation demands will ensure the removal forever of that term from the political lexicon.

Major surgery within the procurement system should produce substantial savings with a drastic reduction in staffing levels, while the implementation of restructured acquisition procedures will save billions of pounds. The current system produces flexible specifications that attract competitively low tenders, but then once accepted the Consensual Incremental Extortion (CIE) begins, with agreed amendments to the initial specifications warranting disproportionately large price increases. A supplier might suggest a modification that will produce a marginal improvement in performance, perhaps of one per cent, and then the total price may be increased by two per cent or by five per cent or by whatever percentage is expected to slip past without controversy. Later, when measure-countermeasure inflation kicks in, the exponential curve, starting from this heightened base, heads for the stratosphere. CIE has destroyed the UK’s Armed Forces’ ability to wage war against ill-armed and uneducated tribesmen — that is the measure of the MoD’s procurement failure. Michael will henceforth prevent this by insisting that suppliers meet exact specifications or face penalties, just as when they deal, for example, with civil airlines.

Intelligent savings need not be restricted to the inevitable staff reductions. The cost of low-intensity wars can be reduced by introducing the disciplines of careful asset selection which require cost-effectiveness in the choice of weapon selection. It is, for example, absurd for Tornados at £33,000 per hour to be used for tasks that can be done equally well, and sometimes rather more efficiently, by smaller and far less expensive aircraft at a cost less than one per cent of that figure, and yet I understand there are plans for all the Tornados we used in Afghanistan to be replaced by Typhoons modified at huge cost for close air support. Greater financial disciplines are desirable anyway, but for the Middle East, which may require our presence for perhaps the next half-century, or even longer, they are essential. Effects-based targeting is fine; I want effects-based spending, too.

Now I should like you all to read Lady Hodge’s book, Called to Account, so that you clearly understand how the MoD has wantonly wasted the Defence funds. As Chairman of the Public Accounts Committee she dug deep into the mire, and we must all learn from what she unearthed. You should all read also Bullingdon Defences, because that reveals the cost to morale inflicted on our Armed Forces by the MoD’s catastrophic carelessness and neglect. It’s your baby, Michael, but we all must share the responsibility for ensuring there will be no repetition.

We shall meet at the same time next Thursday.

We have been unable to confirm the authenticity of this leaked text, but shall leave it online until it has been formally denied. 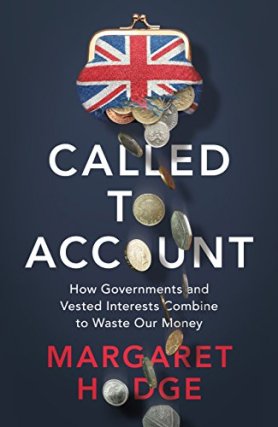