Last December‘s Mail Online decision to restrict its blogs to those of staff writers prompted suggestions that the William Forbes blog be continued independently, but other obligations intervened, despite heavy pressure from colleagues wishing to use it as an outlet for their most pressing concerns, principally those in respect of the egregious carriers-JSF programme, “Carrier-Strike”.  This is especially relevant today with the news of back-bench Tories resisting further cuts in our Armed Forces and the decision to replace trained and experienced soldiers with weekend soldiers trained on summer camps ~ a policy that contributed substantially to our defeat in Norway in 1940.  These independently minded and patriotic MPs, whose spokesmen have served in uniform, deplore such “white elephants” as HS2 being funded by money needed to sustain the Armed Forces and to improve the nation’s defences. The same argument applies also to the Carrier-Strike programme, to its vulnerable carriers and to their troubled jump-jet Joint Strike Fighter, the JSF F-35B.

Several months ago I wrote of the Joint Strike Fighters needing the new aircraft carriers as their home, and of the carriers needing the JSFs as justification for their own existence, but this was intended merely to illustrate the absurdity of the deteriorating situation in which the nation finds itself.  The current civilian head of the Armed Forces, Jon Thompson, is reported in Hansard as having said to the House of Commons Public Accounts Committee, “the Ministry of Defence got itself into an unbelievably difficult financial situation” and as having then continued: “if you are £72 billion in a budget black hole, you have to do something about it.”

Many will be aware that the “black hole” was originally £32 billion, then £35 billion, and then finally (we thought) £38 billion, at which point this blog described it as an illusion, and in its efforts “to do something about it” Whitehall has destroyed several regiments, reduced the Royal Navy to below its critical mass, and emasculated the Royal Air Force.  Now, apparently, according to Mr Thompson, the figure is £72 billion.

From my colleagues’ perspective the most significant factor in this disaster is the Carrier-Strike programme whose eventual price will be immense.  No one knows what the exact figure will be, partly because the JSF manufacturers cannot give one for the JSF, and partly because the partners building the carriers under the MoD’s supervision have a long history of unreliable price forecasts, but if the original plans are retained the long term costs will certainly exceed £25 billion (and if through-life costs are calculated carefully they may exceed £40 billion). 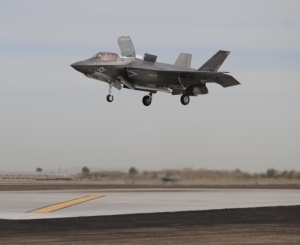 The F-35B JSF about to land on a test platform

Independent analysts insist that the carriers will be too vulnerable to use in a hostile environment after 2020, that the aircraft, the STOVL F-35B, will not operate as was agreed in the celebrated Joint Operational Requirements Document (the JORD) and will be tactically useless, that we cannot afford to complete the programme, and that the collection of regiments, ships and aircraft lost by its lunacy reduces the international standing of the UK to the third rank.  Each of these arguments will be examined here during the months of October and November.

Those who have read this blog in the past will know my own view:

The programme in its current shape was devised by the last Labour administration for a political purpose, electoral advantage.  It would secure a few thousand jobs in areas the then chancellor, later prime minister, thought important.  The incoming Coalition could have dumped it, but was persuaded by some extremely dodgy arithmetic that it was too expensive to cancel and then made it the centrepiece of its equally dodgy Strategic Defence and Security Review, the infamous SDSR2010.  (The National Audit Office has since revealed that cancellation of both carriers would have saved £1.2 billion.) True Conservatives believe in conserving the ability to defend our national interests, not in chasing glamorous but senseless projects bequeathed by previous governments.

But this is for future blogs.  Today, with the renewal of activity, a lighter approach is more appropriate.  Accordingly we shall turn to my old friend Nasruddin, the acclaimed philosopher-fool.  For those who know little of him I should say that although many countries claim him as their own, with Turkey currently making perhaps the strongest case, I believe he was more probably born in Bokhara in Uzbekistan (and thus, being familiar with neighbouring Afghanistan and its sad history, is a useful man to know, as will become apparent).

When Nasruddin returned to his house one night after having enjoyed an evening at the tavern he lost his keys and dropped to his knees to search for them with the help of the street light.  A passing friend asked what he was doing and offered to help. Then two more friends returning from the tavern joined them, and although soon he was surrounded by willing helpers the keys could not be found.  Eventually one asked, “Mullah Nasruddin, where exactly were you standing when you dropped the keys?” Nasruddin paused to think and then replied, “Over there, by the door.”  His friends were puzzled.  “Why then are we searching here?” they asked.  “Because the street light is here,” explained the mullah patiently.

And that’s all I shall add today in respect of the planned employment of HMS Queen Elizabeth and HMS Prince of Wales (whose Photoshopped fantasy decorates the top of this page).

For the 2012 archives visit forbesblog.dailymail.co.uk